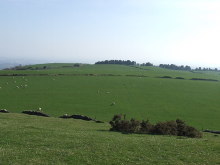 Want to advertise on this website? Create your advert now.

Old or New they all will do to write down here and entertain you!

Leslie had a little cold, but wouldn’t stay at home,
And everywhere that Leslie went; the cold was sure to roam.
It wandered into Catherines’s eyes and filled them full of tears;
It jumped from there to Hannah’s nose, and thence to Matthew’s ears.
It painted Natalie’s throat bright red, and swelled poor Grandma’s head; Grandpa had a fever, and a cough put Linda to bed.
The moral of this little tale is very quickly said
Leslie could have saved great pain with just one day in bed!

Man cannot discover new oceans until he has the courage to lose sight of the shore !

Thank God for dirty dishes,
They have a tale to tell,
While some folk are going hungry,
It shows we are eating well.
So when the sink is piled up,
Don’t even make a fuss,
‘Cause by that stack of evidence
God’s truly good to us.

His name was Fleming, and he was a poor Scottish farmer. One day, while trying to make a living for his family, he heard a cry for help coming from a nearby bog. He dropped his tools and ran to the bog. There, mired to his waist in black muck, was a terrified boy, screaming and struggling to free himself. Farmer Fleming saved the lad from what could have been a slow and terrifying death.
The next day, a fancy carriage pulled up to the Scotsman's sparse surroundings. An elegantly dressed nobleman stepped out and introduced himself as the father of the boy Farmer Fleming had saved.
I want to repay you," said the nobleman. "You saved my son's life."
"No, I can't accept payment for what I did," the Scottish farmer replied waving off the offer. At that moment, the farmer's own son came to the door of the family hovel.
Is that your son?" the nobleman asked.

"Yes," the farmer replied proudly.
I'll make you a deal. Let me provide him with the level of education my own son will enjoy. If the lad is anything like his father, he'll no doubt grow to be a man we both will be proud of." And that he did. Farmer Fleming's son attended the very best schools and in time, graduated from St. Mary's Hospital Medical School in London, and went on to become known throughout the world as the noted Sir Alexander Fleming, the discoverer of Penicillin.
Years afterward, the same nobleman's son who was saved from the bog was stricken with pneumonia.
What saved his life this time? Penicillin.
The name of the nobleman, Lord Randolph Churchill. His son's name, Sir Winston Churchill.

The family Bible can be passed from generation to generation, because it gets so little wear.

How To Know If Your Getting Old

Everything hurts, - what does not hurt, doesn’t work!

You feel like the morning after, but haven’t been anywhere

You have the answers, but no one asks those questions

You look forward to a dull evening at home

You need glasses to find your glasses

You turn out lights for economy, instead of for romance

Your knees buckle, but your belt wont

It is a fact that a serving soldier has been killed every year since the end of the First World War, with the exception of 1968, when no soldier met with death.

This Microportal is built on the 2day Microportals platform which provides you with 3 click access to local and global information crucial both to your personal and working life. The platform provides live local data on transport, what's on, accommodation, eating out, shopping, sport, religion and weather as well as comprehensive reference and resource sections including TV, radio, online shopping, route planning, health, education and more.